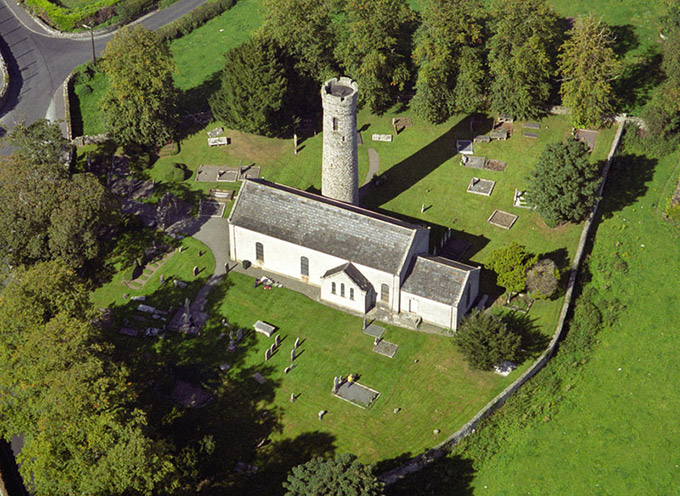 The ancient church at Castledermot was formerly known as Díseart Diarmada, meaning Dermot’s hermitage. St Dermot (d. 823) founded the church here about 800. He was reputedly of royal descent and belonged to an anchorite group known as Céili Dé (Culdees, clients of God). In 841 the site was plundered by the Vikings, and in the following year it is recorded that Cumsudh and Moinach, both bishops and anchorites of Castledermot, died in the same night. Today St James’Church ofIreland church stands at the site of St Dermot’s church, but in the grounds are the remains of a Romanesque doorway, a round tower, two high crosses, a holed stone and a hogback grave or sarcophagus.

Romanesque doorway and Round tower 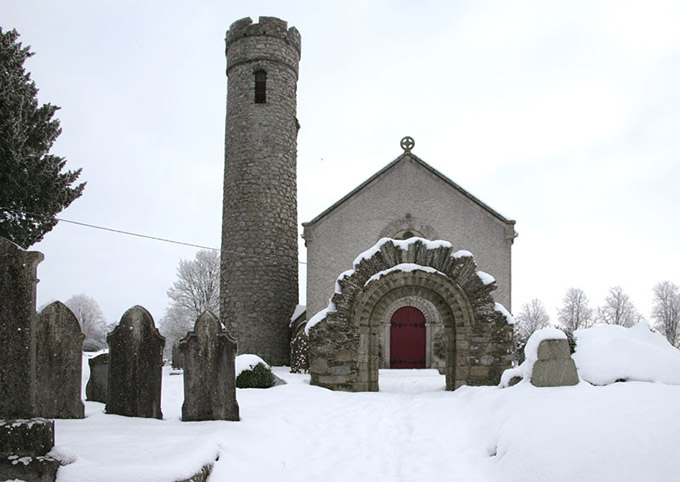 Near the entrance to the graveyard is a Romanesque or round arched doorway that has been reconstructed in its present position. It is recorded that in 1106 the oratory at Castledermot was burned, and it is likely that a new church was built to replace it. However, the Romanesque doorway must have been constructed sometime later and can be dated to around 1150. Today there are no other traces of a 12th century church and the present Church of Ireland building dates to the early 19th century. Attached to this modern church is a fine example of a round tower that stands 20m high, and probably dates to the 11th century. The doorway is almost at ground level and is connected by a passage to the modern church. The top of the tower with its battlements and large windows was reconstructed in the early 18th century and a bell dated 1735 hangs in the top floor. This is an interesting example of an ancient Irish bell tower being reused as a belfry in more recent times.

In the graveyard there are two high crosses that are thought to date to the early 10th century. The North Cross is over 3m high and on the east face is a crucifixion scene surrounded by the twelve apostles. Among the biblical scenes on the west face is Daniel in the lions’ den and at the head of the cross is a wonderful depiction of Adam and Eve beneath an arching apple tree. On the arms of the cross are carvings of David playing his harp and the sacrifice of Isaac. On the base of the cross are unusual S-shaped spirals as well as a depiction of the multiplication of loaves and fishes.

The South Cross is over 3.5m tall and on the east face are a series of panels featuring a range of geometric patterns. The figurative carvings are largely on the west face and include the crucifixion. Other scenes are similar to those found on the North Cross, including David playing his harp, the sacrifice of Isaac, Adam and Even under the apple tree and Daniel in the lions’ den. On the base is another example of the multiplication of the loaves and fishes as well as a hunting scene. 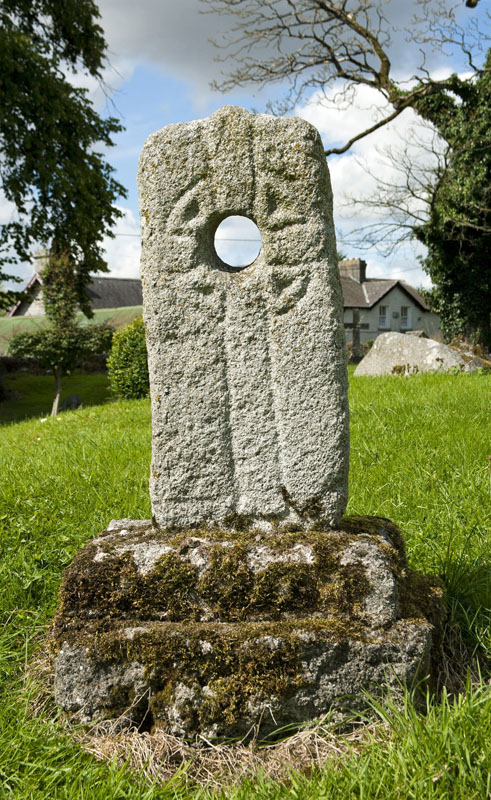 In the graveyard is a holed stone that was formerly known as the ‘swearing stone’. A ringed cross is carved on one face of the stone and the circular hole extends through the centre of the cross. The purpose of this stone is somewhat enigmatic, but it is suggested that it may have been used during wedding ceremonies or for swearing oaths or allegiances in early Christian times.

Near the South Cross is a stone monument sometimes referred to as a hogback grave. It is the only example of its kind known in Ireland, but similar monuments are found in North Yorkshire where they have been dated to the 10th and 11th centuries. The Yorkshire hogbacks are believed to be a form of grave marker based on Viking-style longhouses. The hogback grave at Castledermot is 1.7m long and is decorated with two crosses on one side. It is probably best understood as a sarcophagus intended to mark the grave of some important ecclesiast, perhaps even St Dermot himself, such as the stone sarcophagus at Clones, Co. Monaghan.