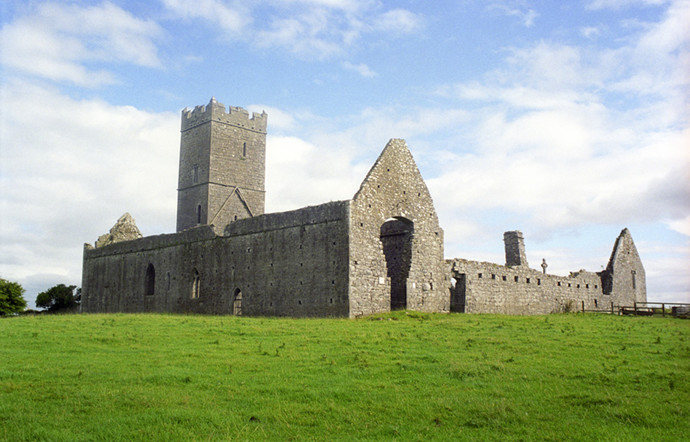 As you turn west off the M18 Limerick to Galway motorway onto the N85 heading for Ennis you will see off to your right, on the outskirts of the town and on the W bank of the River Fergus, the attractive grey stone ruins of Clareabbey. The Ennis-Limerick railway track runs very close by but the new link road opened up a previously unseen view of these remains in their landscape setting. The juxtaposition of the modern motorway and the ancient remains is very striking.

In recent winters, flooding has left the abbey almost isolated on an island of its own. 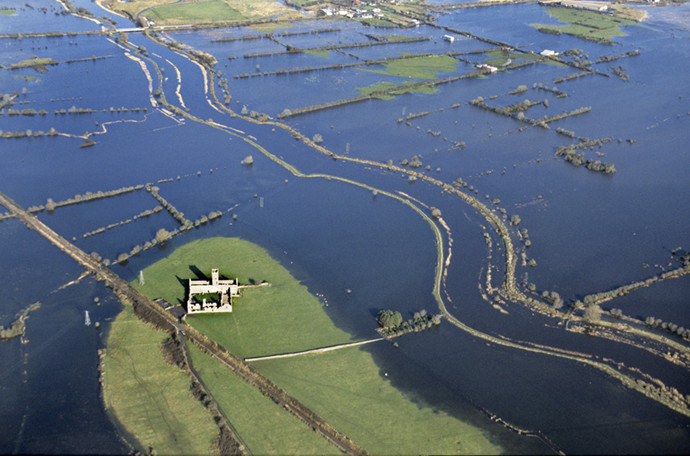 The abbey is one of four Augustinian houses in the county (the others are Inchicronan, Canon Island and Kilshanny) and there are the remains of an Augustinian nunnery at Killone. Clareabbey was founded in 1189 under the patronage of Donal Mór O’Brien, king of Thomond, and became an important ecclesiastical centre in the medieval diocese of Killaloe. Some parts of the single-aisled church date to the late 12th century but the majority of the existing buildings date to the 15th century when the Meic Craith lineage held the abbacy. After the dissolution of the monasteries in 1541, it passed to various members of the O’Brien family, but the canons seem to have lived on in the abbey until about 1650. A road (CL033-120002-) running N-S outside the cloister to the W yielded dates in the 13th and 14th century. A battle (1278) is named here on the OS 6-inch map. This may refer to ‘the Rout of the Abbey upon Mahon O’Brien’ mentioned in the 14th-century heroic tale Caithréim Thoirdhealbhaigh.

The church has a fine east window and an inserted three-storey tower. 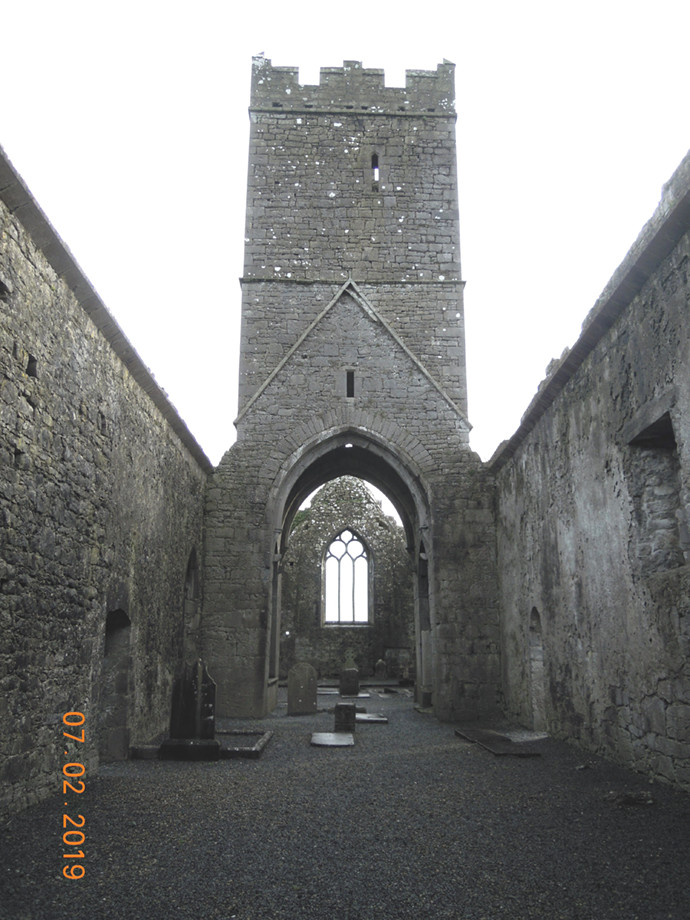 The cloister is to the south and only portions of the east and south ranges survive. The south range had a kitchen at the west end and the refectory at east with a large chimney between them with a fireplace at either side.

It was probably in the reign of Teige Acomhad O’Brien, around 1461, that the church was repaired, the well-preserved E window inserted, the tower built, and the domestic buildings with their unusual floral window at the SE corner added.

Some glazed pottery from France was recovered during excavation in 2005 and some pieces of lead suggest that the abbey’s windows were glazed.

Clareabbey is a national monument in state care. For a detailed description and more photographs see CL033-120---- in the Historic Environment Viewer under the Archaeological Survey of Ireland tab on this website.