Ring-cairns are part of the Early Bronze Age burial tradition (c. 2400-1200 BC). They consist of a low, wide ring or bank of stones surrounding an open, roughly circular area which is, or was initially, free of cairn material. The inner and outer faces of the bank may be kerbed. These are usually around 13m in external diameter, though they can range from 3m up to 28m. This monument can be difficult to identify as they resemble hut sites or denuded cashels but one of their characteristic features is that they lack an obvious entrance. To date only 36 examples have been identified nationwide, 6 in Connaught,  8 Ulster, 13 in Munster and 9 in Leinster. 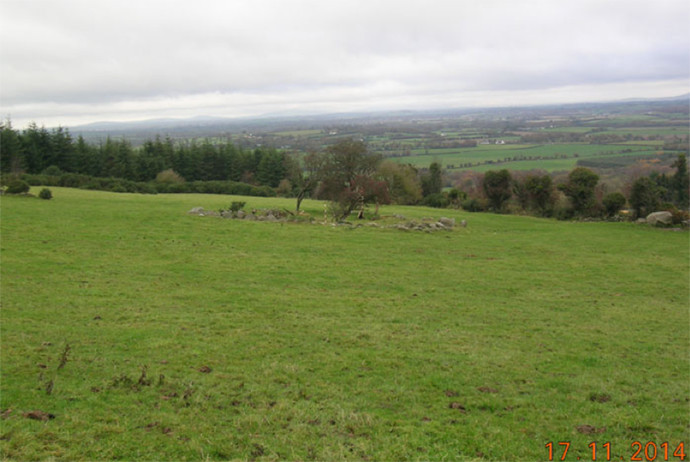 Overview of the ring-cairn from the south looking north

A ring-cairn in Sroove, Co. Sligo (SL046-003001-) was excavated in 1973 (Wallace 1974, 23-4). The ‘ring’ consisted of a circular bank of loose stone (overall diameter 14.5m; H 1.7m) defined by internal and external kerbing and two cists were uncovered in the otherwise empty interior. Another was excavated in the 1970s in Carnkenny, Co. Tyrone (Lynn 1973-4, 17-31). In this instance the ‘ring’ consisted of a rough pile of boulders with a crude line of larger stones to mark the inner and outer edge (overall diameter c. 25m) and it partly overlay what was interpreted as a pyre. Within the centre a low cairn covered a scatter of small cremation pits and stake-holes. 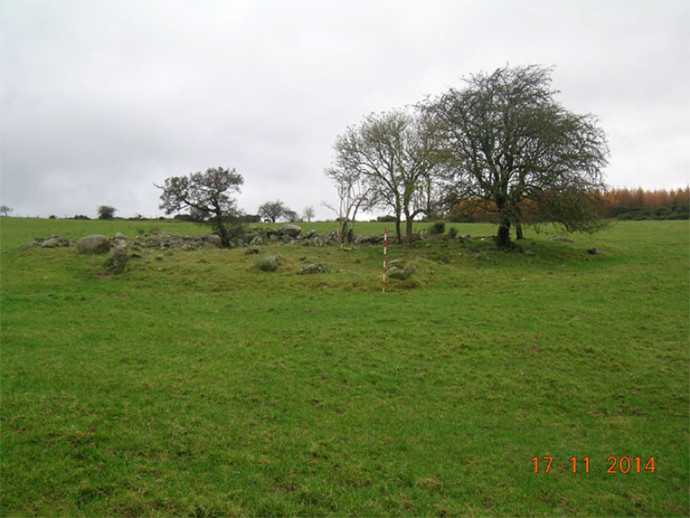 Overview of the ring-cairn from the east

The ring-cairn at Cronaliegh is located in upland terrain, on the northern slopes of the Blackstairs Mountains. It is on the lower slope of a hill which rises to the south-west. There are extensive views to the north and good to the east but the view is impeded by the rise in slope to the south and west.  This monument consists of roughly circular area (int. diam. 20m N-S; 19.2m E-W; ext. diam. 30.6m N-S; 29.3m E-W) enclosed by a bank composed of small stones. The bank (int. H 0.1m; ext. H 1.7m; Wth of kerbed bank 4-4.6m; overall Wth including slip 5.1m) is retained by kerbing stones internally (average dims. H 0.4m; 0.3-04m x 0.4-0.5m), these being best preserved in the north-east quadrant. There is also a suggestion of external kerbing, with several possible kerbstones protruding from the bank slip from north to south. 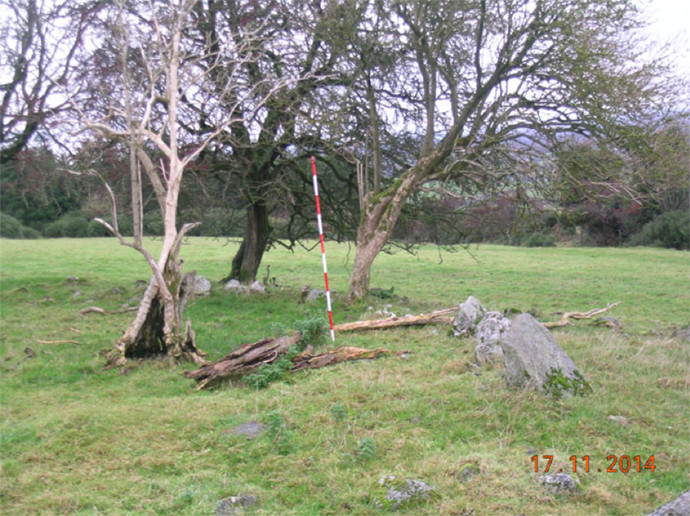 Detail of the north-east quadrant from the south

In the east-south-east there is a large external kerbstone (H 0.66m; Wth 0.8m; T 0.2m) with another large more rounded boulder immediately to the north, though on a slightly different line suggesting it may have slipped forward. Though built on a hillslope the interior is relatively level, though slightly hummocky. The bank (int. H 1.47m; ext. H 0.2m; overall Wth 5m) from south to north is grass covered and falls sharply to the interior, particularly where the slope is highest. There has been a lot of field clearance stones dumped on the bank, particularly along the inner face of the bank from south to west-north-west, with some spillage into the interior. There is a slightly depression in the bank in the northwest quadrant and the inner portion of the bank is denuded in the east-south-east. The monument is known locally as the Raheen.

Only one other ring-cairn (CW019-069----) has been identified in Co. Carlow. It is 11.7km to the south-west of Cronaliegh, on the western slopes of the Blackstairs Mountains, in the townland of Knocksquire or Knockscur. These enigmatic monuments are distributed widely in Britain and Ireland and on the basis of excavations work  associated finds and human remains  date predominantly to the Bronze Age from c. 2400 BC – 500 BC.