The first church at Ferns was founded at the turn of the 7th century by St Aidan, also known as St Máedhóg (who died in 624), who was reputed to have been a pupil of St David of Wales. Sometime after his death he was succeeded by St Moling who had already founded a church at St Mullins, Co. Carlow (link here). During the 9th and early 10th centuries the church at Ferns was very vulnerable to attacks by Vikings from their settlements at Arklow and Wexford. Ferns was intimately linked with the King of Leinster, Diarmait MacMurrough, who fled to Bristol in 1166 shortly after he was stripped of his title. Some years later he notoriously returned, bringing with him the first Norman knights from Britain to Ireland. The remains at Ferns consist of the 13th century cathedral, several high crosses, St Mary’s Abbey, St Peter’s Church and an early 13th century castle.

The earliest cathedral was built here at the beginning of the 13th century by John St John, Bishop of Ferns between 1223-1243. The principal remains consist of fragments of the two side walls of the chancel of the 13th century cathedral, which was quite unusual in having a series of closely set windows. Much of the original cathedral has been lost or incorporated into the present Church of Ireland cathedral (St Edan’s, built in 1817), which also houses a wonderful effigy tomb. The tomb features a bishop wearing a mitre and holding a crozier. His head rests on a cushion and a dog is placed at his feet. It is believed that this is the tomb of Bishop John St John who died in 1243.

To locate Ferns Cathedral on the map please click here. 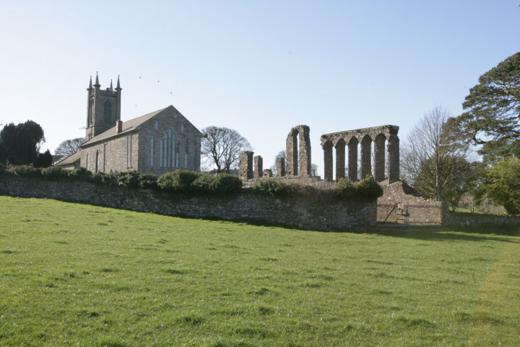 In the grounds of the medieval and Church of Ireland cathedrals are three plain granite crosses and a cross slab that testify to the earlier origins of Ferns. Diarmait MacMurrough reputedly died at Ferns in 1171 and the broken fragment of a decorated high cross in the graveyard is said to mark his grave. 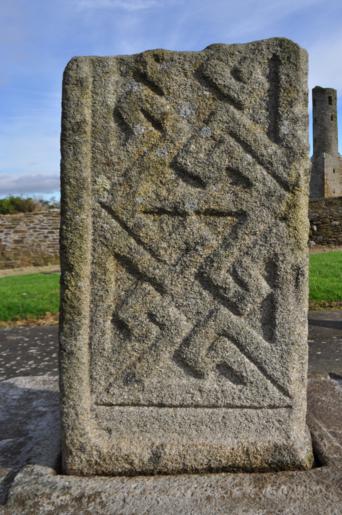 In 1162, a new Augustinian monastery was founded at Ferns by Diarmait MacMurrough. Only parts of the church and the vaulted chancel survive today. Behind the chancel is the small sacristy where vestments and sacred vessels were kept. A stairs in the sacristy rises to the sacristan’s room on the first floor. The most unusual feature is the belfry tower at the west end of the church. The tower has a square base, however the upper part of the tower is round and more in keeping with round towers found at several other church sites. 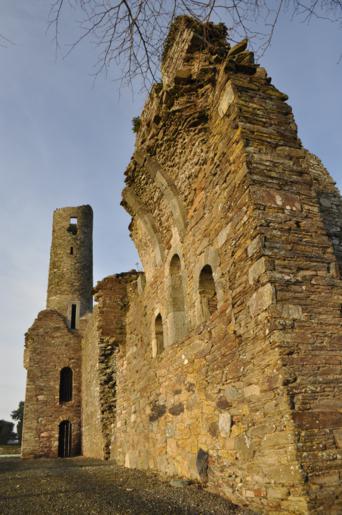 This curious church has a number of early features; however it appears that it was actually constructed towards the end of the 16th century. There are two windows that most likely originally formed part of the 13th century cathedral nearby and have been reused in this building. There are also the remains of an even older Romanesque window, from the mid-12th century within the church that may have originally formed part of St Mary’s Abbey near the cathedral. It appears then that this church is a relatively late building that was constructed by recycling parts of older churches at Ferns. 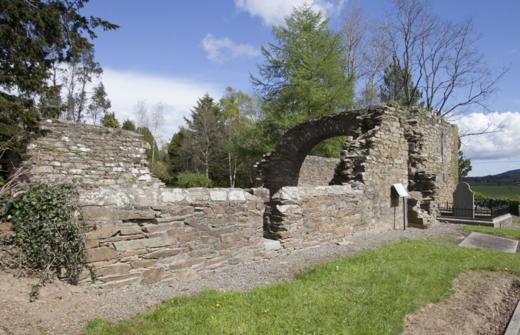 It is believed that in the middle of the 12th century a castle built by Diarmait MacMurrough stood on the site of the present stone castle. In the 1170s a new castle was built at the site by the sons of Maurice Fitzgerald, but all trace of this castle has disappeared. It was probably replaced entirely by the stone castle that stands on the site today. About 1224 the present stone castle at Ferns was completed by Earl William Marshal the younger, Lord of Leinster, and in the early years was the stronghold of the Marshal family. Today much of the original castle has disappeared, but it is clear from what remains that this was a very substantial and imposing castle for its time. The castle consisted of a large rectangular block with round corner towers at each of the four angles. Two of these towers survive today, and in the eastern one is a finely preserved chapel for the former residents of the castle. Originally the castle was surrounded by a large moat, large sections of which were cut through solid rock.

To locate Ferns Castle on the map please click here. 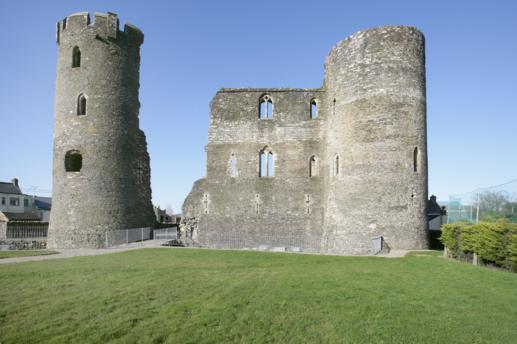