The ground rises as one drives northwards from Ballyboghil into the village of the Naul in Fingal, north County Dublin. This field is situated on the western side of the road as one approaches the village in Loughmain townland. 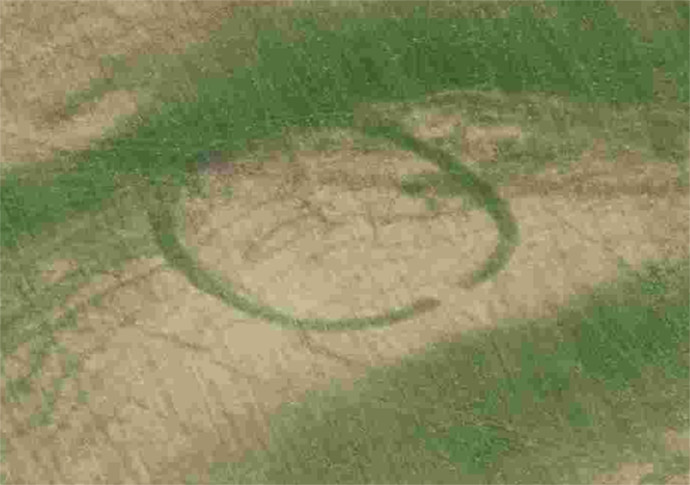 The monument (DU004-074----) was first identified by the landowner, Mr. Francis Macken, from his tractor as he applied fertilizer to his field in July 2018. Despite the dry summer many farmers in Fingal were able to get two cuts of silage from their pastures and Mr. Macken was in the process of preparing the field for the second growth phase.
Mr Macken observed a broad ring of dark grass growth set against a background of stunted lighter-shaded grass from the cab of his tractor. With the assistance of his nephew Mr. Warren Macken, they commissioned a drone survey (Drone Services Ireland) which highlighted the monument and identified several other features in the same field (DU004-075---- ring-ditches). This referral to the National Monuments Service is one of the hundreds sent to the Archaeological Survey of Ireland during 2018 on foot of the extraordinary summer weather and exemplifies the interest and concern which members of the public have in relation to the protection of archaeology in their locale. 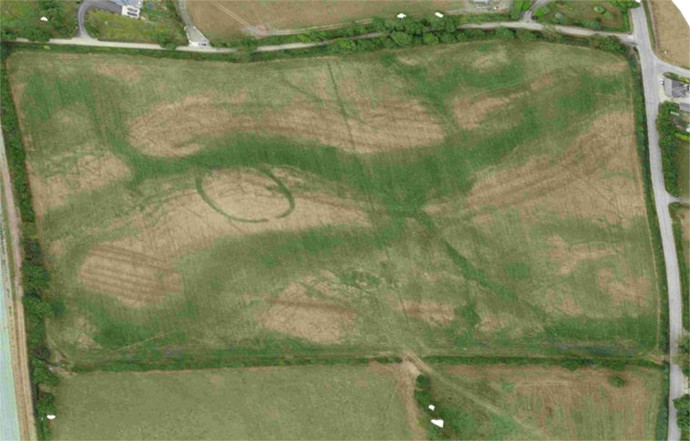 The enclosure itself is sub-circular (dims 44m E-W; 43m N-S ) with somewhat squared corners especially at NE and SE sides. It measures 44m (E-W) internally to the inner edge of the fosse which is 2.8m wide at E but appears to taper in width towards the entrance. The fosse terminates sharply in linear terminals at the ESE with the entrance causeway measuring 3.8m in width. Within the interior at the eastern side of the monument a rectangular shaped crop-mark is traceable. This measures approximately 15m in overall length E-W and is 5m N-S. On the basis of the setting, scale and form this it is probable that the cropmark represents a ringfort or rath, a family farmstead of the Early Medieval Period, c. 500- 1200 A.D. There are significant other cropmarks within the field. These comprise ring-ditches,  square and linear features, some of which may relate to the same phase of archaeological activity as the ringfort, others  possibly not.

During the particularly dry period of the summer of 2018 the National Monuments Service has received information about a wealth of previously unidentified cropmarks which have appeared in the Irish landscape. Reports have come from holiday-makers travelling to and from Ireland, from personnel such as the air corps who fly regularly, from licensed drone operators and commercial pilots, from landowners and the public. Latterly,  with the availability of aerial  imagery on Google Earth from the summer of 2018,  many more reports have come to the attention of the Archaeological Survey of Ireland. Cropmarks appear due to differential growth and crop colour variation caused by differences in the moisture-carrying capacity of the substrata. Cropmarks are particularly impressive when the contrast in soil moisture level is high such as in particularly dry period.  When soils are generally wet that contrast is limited. Ditches, pits and gullies will hold additional moisture and thus can continue to grow while the surrounding soils become drier in periods of drought. Conversely soils above buried masonry features such as walls and tiled floors lose moisture and growth will stunt compared to the surrounding ground which stays wetter. Features so revealed can be called parch marks or scorch marks.  Where these areas form patterns and shapes such as rings, arcs and rectangular areas they may be visible from above – even from a tractor cab as was the case here at Loughmain. 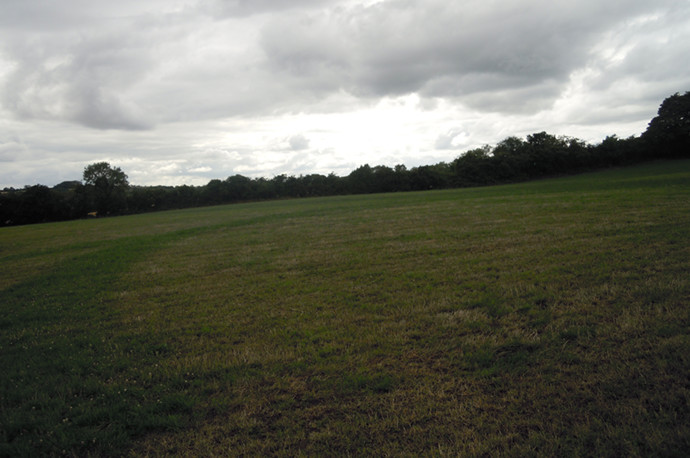