This stone pair is located in an area of rough grazing land on an east-west running ridge. It commands panoramic views overlooking Ballynakill Harbour and Tully Mountain to the north-west. Diamond Hill and Doughruagh or Kylemore Mountain are visible to the east and north-east respectively. The pair consists of two granite boulders, 2.3m apart, and while not parallel with one another, they lie on a roughly north-west/south east axis. The taller boulder (H 1.32m; Wth 1.3m; T 0.85m), to the north-west, is flat-faced to the east and bears a more rounded profile to the west. The shorter south-eastern boulder (H 0.6m; L 1.2m; T 1m) is roughly trapezoidal in shape. The monument is obscured by the dense growth of cotoneaster, particularly around the west and north faces of the larger boulder. However, according to local information, it was clear of overgrowth in the mid-1960s, when it was visible as a more prominent feature in the landscape. 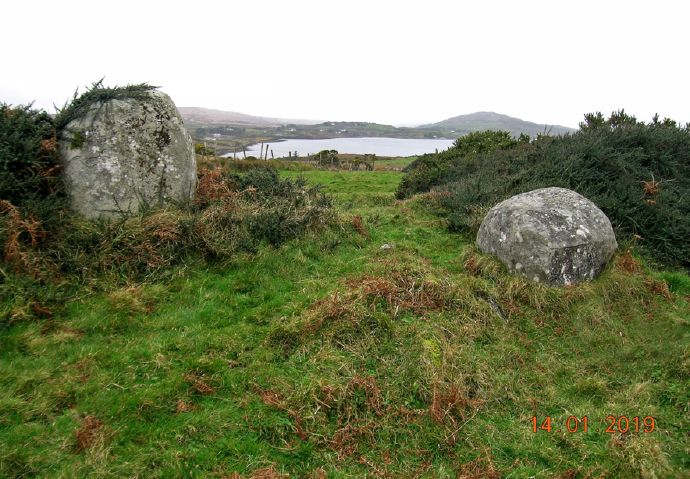 View from south-east overlooking Ballnakill Harbour to the north-west

The characteristics of the stone pair are typical of this type of monument in that the boulders are set close together, the taller boulder is to the west and the boulders are not parallel but are out of line with each other. In Ireland the majority of stone pairs are found in the Cork/Kerry area. Eleven examples have now been recorded in county Galway and eight of these, including this one, occur in an area between Cleggan, Moyard and Letterfrack where most are located on or just off the summits of hills and ridges. Stone pairs are generally dated from the Bronze and Iron Ages (c. 2400 BC-AD 500). They probably had a ritual, ceremonial or commemorative role and some are considered to have been aligned on various solar and lunar events. They are related to stone rows. 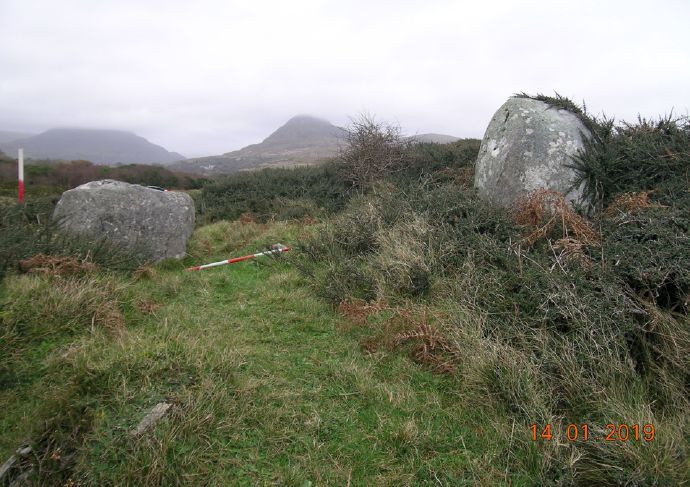