Cursus monuments consist of parallel banks of earth or stone, usually around 30m apart, which run for at least 100m, most examples being between 200m and 400m long. Some such monuments in England have been dated to the Neolithic period. In recent years work by Chris Corlett and Ivor Kenny have brought several previously unrecognised cursus monuments to light. Unlike many of the classic lowland English examples, these Leinster cursus monuments are on steep mountain sides. Following on from their work a cursus on the east slope of Slievenamon in Co. Tipperary has been identified.

This is the widest of the known cursus monuments, with a maximum width of 90m, though it narrows to 75m at its upper western end. The upper end of the cursus terminates with a straight bank. Terminating banks have been noted at some other examples, such as a recently identified cursus in Co. Kilkenny (KK005-004----) where the upper portion terminates in a curving bank. Curiously at Keadeen cursus, Co. Wicklow (WI027-089----), it is the lower end of the cursus which has a straight terminating bank. 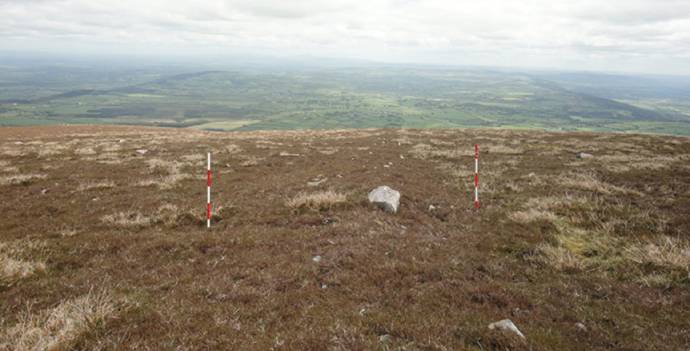 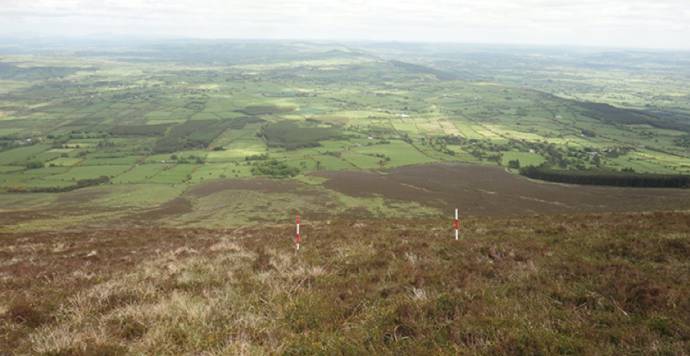 Because these monuments appear to have served no obvious practical purpose, and given their siting and association with cairns, it is presumed that they had a ceremonial function. When freshly constructed they must have looked quite striking in the landscape. Perhaps these monuments were symbols of tribal power as well as forming a physical structure for some long-forgotten ritual.