The recent discovery of a large henge-like enclosure within the Brú na Bóinne UNESCO World Heritage Site at Newgrange has attracted worldwide interest: it is a remarkable discovery within an already phenomenally rich archaeological landscape.

The henge discovered by Boyne Valley researchers and photographers Anthony Murphy and Ken Williams is a large ceremonial enclosure, which showed up clearly on drone cameras as a cropmark in open farmland. The Newgrange henge enclosure is close to the Great Passage Tomb and is likely to date to the Late Neolithic period, c. 2900 BC.

The extraordinary dry weather across Ireland and the northern hemisphere in general has led to reports of many cropmark features becoming visible, indicating buried archaeological features that were previously unknown. The National Monuments Service (NMS), as State Party to the UNESCO World Heritage Convention, arranged for an aerial reconnaissance to be carried out over the World Heritage Site Core Area. The aim of the survey was to capture high resolution imagery of archaeological sites and of the Boyne Valley floodplain landscape and to record individual sites as they appeared on the ground. As a result, previously unrecorded archaeology has been discovered and significant additional information on known sites across Brú na Bóinne has also become available.

The NMS will continue its preliminary analysis of its large stock of high resolution imagery, as well as any images received by external researchers and photographers. As a first step, the findings are being mapped to place all discoveries in the context of the archaeological landscape of Brú na Bóinne. As that analysis progresses, NMS will bring together all stakeholders to share the full results of the survey work and to initiate discussion on future archaeological research aims for Brú na Bóinne.

There is no doubt that there will be further fascinating and intriguing stories to tell concerning the landscape at Brú na Bóinne. It is already very clear that the new discoveries will enhance our appreciation and transform our understanding and knowledge of the prehistoric landscape at Brú na Bóinne. UNESCO has been informed of the exciting ‘new additions’ to the World Heritage Site. 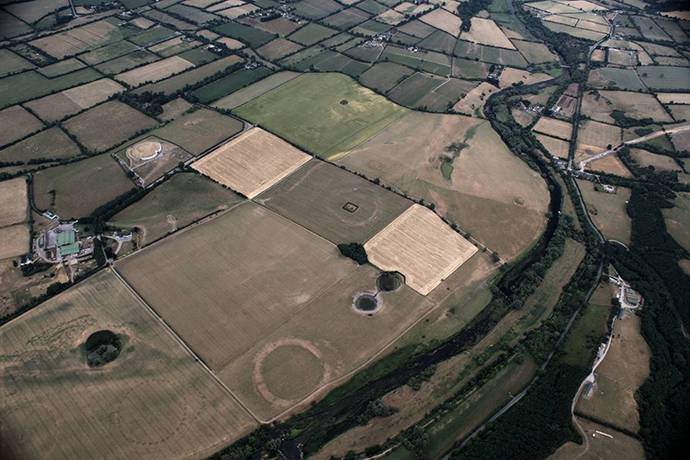 Image 1: Aerial view of the Boyne floodplain to the south of Newgrange passage tomb.

From 5,000 years ago Neolithic farming communities built a range of impressive monuments across this landscape that is designated as the Brú na Bóinne World Heritage Site by UNESCO. Recent discoveries will transform our understanding of this archaeological landscape. 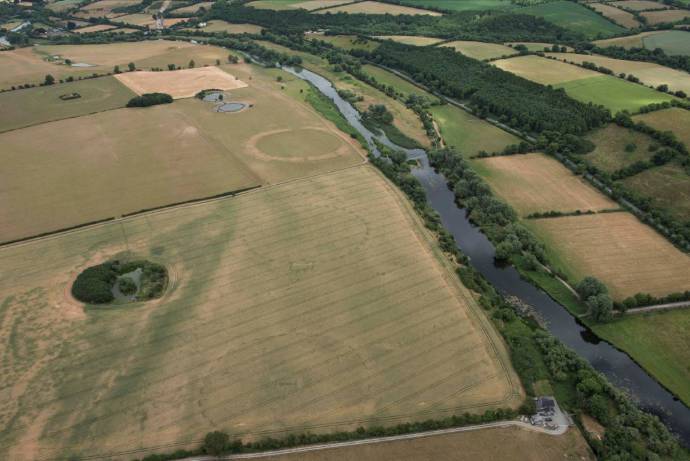 The photograph dramatically captures the configuration of three large circular ceremonial enclosures (diameters range between 130m to 200m).  The arrangement of the three massive henge enclosures suggests that the construction and use of all three may have been conceived as a single design. These henges are likely to date to the late Neolithic around 2900 BC. 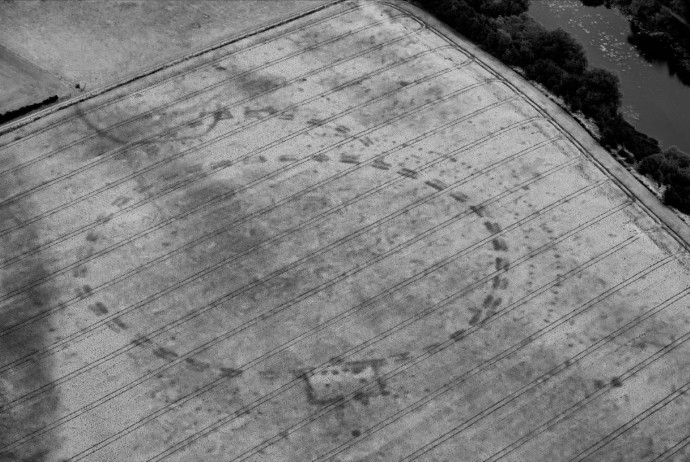 High contrast image of newly-discovered henge at Newgrange. Discovered by Anthony Murphy and Ken Williams, this enclosure displays a remarkable and sophisticated geometric design. The evidence obtained raises many questions in terms of its function and form

Adjusting the high-resolution digital imagery has sharpened the contrast of the cropmarks of the buried features, allowing greater appreciation of the geometric design and layout of the enclosure.

Two concentric rings of post-holes surround the inner enclosure formed by a series of segmented ditches. An elaborate series of ditches and post holes in a rectangular setting can be seen at the bottom of the image while the projection at the top is likely to mark an entrance feature. 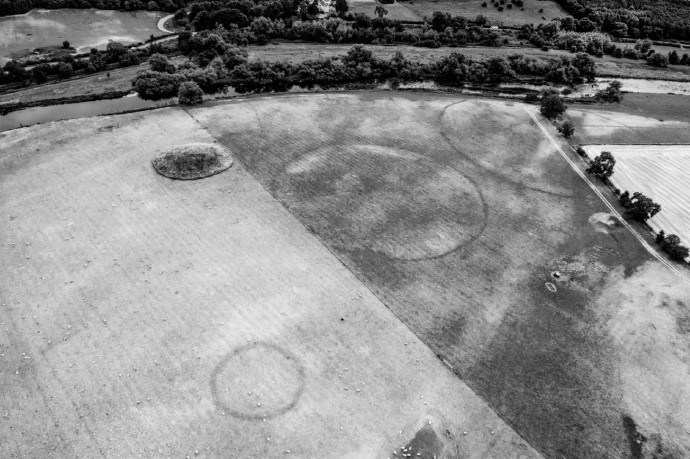 Another newlydiscovered group of henges south-east of Newgrange passage tomb.

Located on the lowest terrace of the floodplain south of the Newgrange passage tomb, a pair of henge or ritual enclosures is located close to a mound which is thought to cover a passage tomb (known as Site B).

A smaller circular cropmark in the foreground depicts an enclosure which is also likely to have had a ritual function.

At well over 100m in diameter, the scale of the large enclosures, each marked by cropmarks indicating a wide bank and a well-defined outer ditch, is evidence of the communal effort and resources that would have been required in their construction. As gathering places they would have provided large arenas for ceremonial activities. 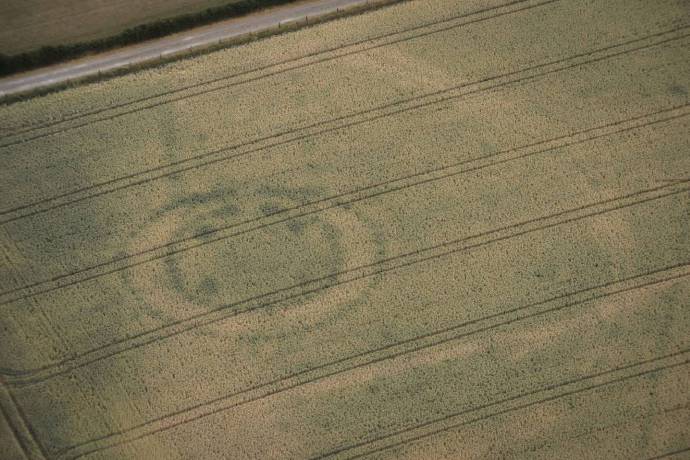 About 500m south-west of Newgrange passage tomb, this high resolution image shows a double ring of post-holes about 30m in diameter enclosing an arrangement of four huge post-holes with entrance features to the east.

The entrance is enhanced by two parallel lines, probably also once marked by large timber posts.

The image also shows markings indicating an outer enclosure, around 80m in diameter, enclosing the smaller features. The site might have served as a mortuary enclosure. 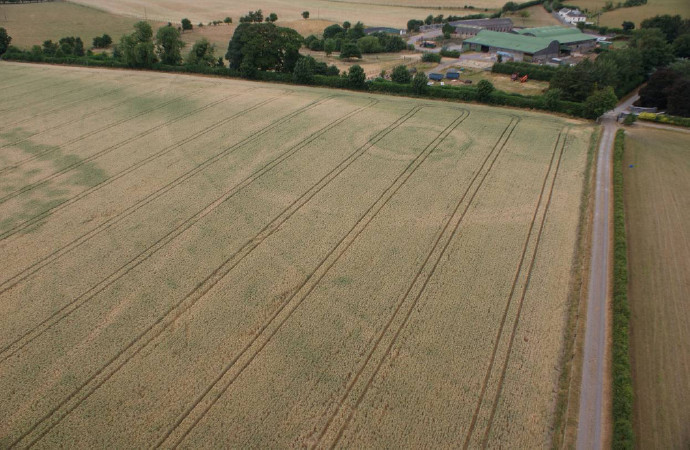 The extent and function of these features are particularly intriguing.

The parallel linear features form an arc that can be traced for a distance of c. 200m across the field of crops. If the arc is part of a circular enclosure, it would be of a massive scale, almost 400m in diameter. Alternatively, these features may form part of a processional routeway leading to the terraces of the Boyne River floodplain and its henges. 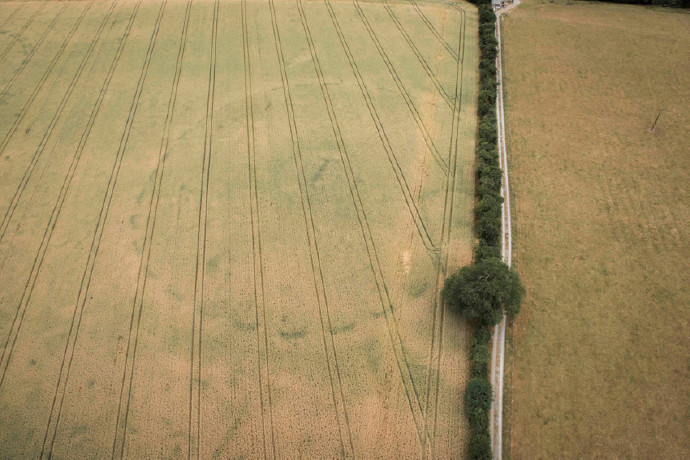 This ceremonial enclosure is one of three in a row on the floodplain terrace on the Boyne River. It lies south of Newgrange passage tomb and immediately west of the henge reported to the Department by Mr Murphy and Mr Williams. Originally identified by Dr Steve Davis of UCD and Dr Kevin Barton, the recent NMS aerial survey has identified incredible cropmark detail, not previously seen.

The dominant enclosing feature is a single line of enclosing rectangular pits. The lighter cropmark contiguous with this line of pits indicates the position of a broad outer bank. The high resolution image raises questions. Do the dark cropmarks indicate pits or are they concentrations of closely set timbers?  Centrally placed within the enclosure is a circular mound with traces of a small surrounding ditch. This central ‘H’ feature is a line of pits with smaller ditches or pits forming its terminals.