Wreck of the Month

Discovery of a 5000 year old logboat in the River Boyne at Oldbridge, Co. Meath

In June 2016 four anglers made a curious discovery while fishing a tidal stretch of the River Boyne at Oldbridge, Co. Meath. Instead of making their usual catch of trout, which the Boyne is renowned for, local angler Stephen Murphy, accompanied by Kieran Mahar, William Gregory and David Johnston stumbled upon the remains of a strange object poking out of the riverbed. Initially it wasn’t exactly clear what they had come across as Stephen and his fellow anglers had fished this part of the Boyne many times previously and had never noted anything usual in the riverbed at this location. However, upon closer examination the group quickly realised they had discovered a section of an ancient boat which they secured for fear it might get washed away. The find was immediately reported to the heritage authorities and following an inspection by the Underwater Archaeology Unit of the National Monuments Service, the find was confirmed to be the base of a logboat (a boat hollowed and shaped from a single tree trunk using axes and adzes). 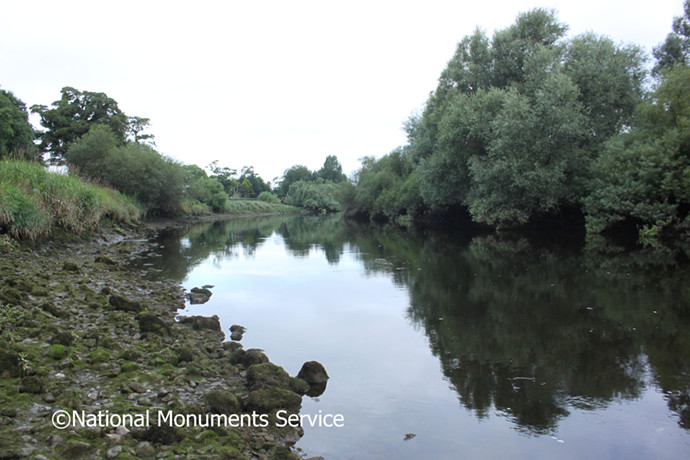 Find spot of the longboat

The logboat was found in the River Boyne approximately 300m upstream of the Drogheda M1 suspension bridge. A light layer of silt and stones partially covered the boat which lay upside-down mid-channel in the river in approximately 1m of water at low tide. The boat was found approximately 8.km downstream from Newgrange or 5.6km as the crow flies. 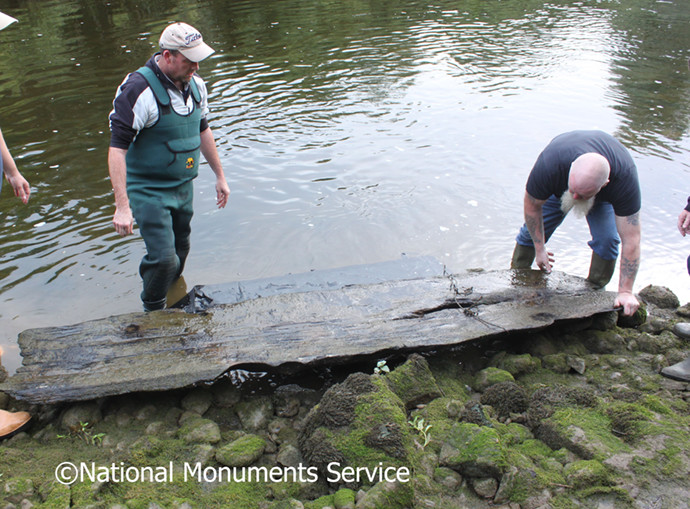 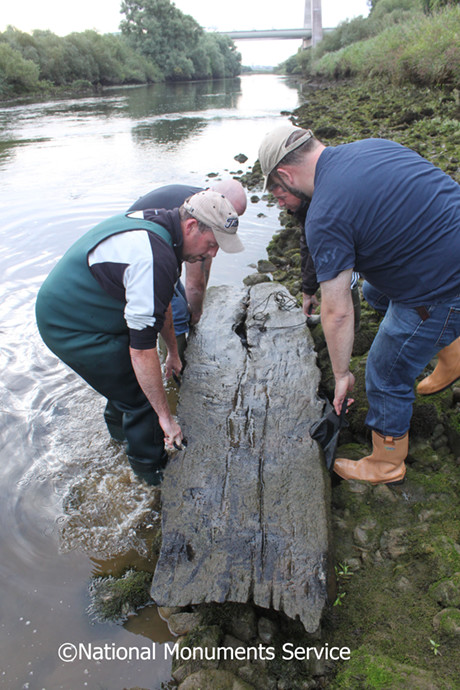 Removal of the logboat from the Boyne using a canvas stretcher 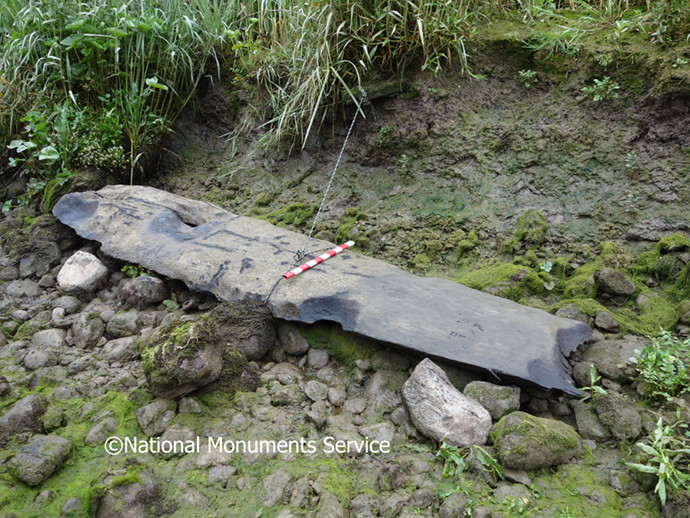 Underside of the longboat

Only the floor of the boat survives; it has an overall length of 3.12m, is parallel-sided in plan and has a maximum surviving width of 75cm. Unfortunately not enough of the boat survives to give a full picture of its original form but it appears to have had a rounded bow and stern, flat longitudinal floor and to have been slightly rounded in transverse cross section. The boat was likely to have been a minimum of 4m in length originally and probably even longer. The boat was hollowed and shaped from a single oak tree but there is no evidence for tool marks or other features surviving on it. Both bark and sapwood are absent. Neither end of the boat survives intact but the norm with logboats in Ireland is that the bow is the narrower end of the vessel. The floor is slightly rounded in transverse section and measures 12cm in thickness near the stern and 9.5cm thick in the middle of the boat. The underside of the stern end of the boat is severely eroded, presenting an uneven appearance, having lain exposed on the riverbed for a lengthy period of time. It is also heavily marked at that end with a number of circular hollows and depressions which were probably caused by the scouring of riverine stones or pebbles on its surface. The opposite end of the boat or bow is smooth and rounded and appears to be the original under surface of the boat. 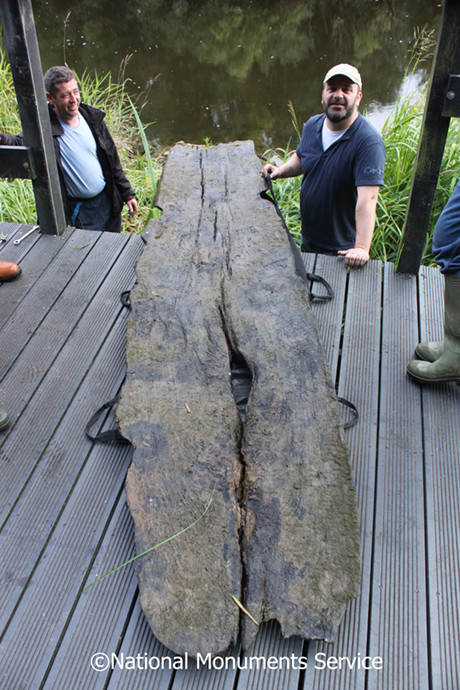 There are two parallel semi-circular hollows carved or hollowed into either side of the underside of the boat near the bow end but it is unclear if these were formed by scouring or if they performed some other unknown constructional related function. The internal floor of the boat is better preserved because this was lying face down on the silts when found. The grain of the wood is relatively straight, along which a series of small splits have formed near the bow end. A larger centreline split measuring 1.34m in length has developed at the stern end and appears to have formed as a result of a tree knot falling out of the boat in antiquity. 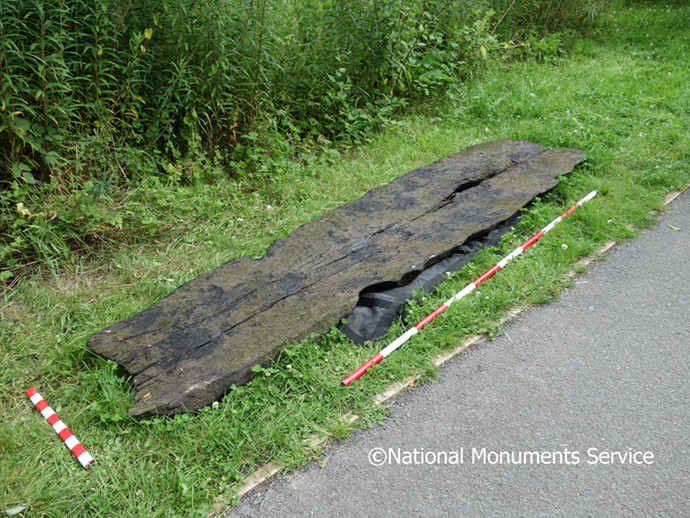 Logboat being recorded on the river bank

After obtaining a Licence to Alter and a Licence to Export from the National Museum of Ireland, a sample was recently sent to the Chrono Centre in Queen's University Belfast which provided a date of circa 3300BC-2900BC placing the construction of the boat some time in or around the turn of the 3rd millennium BC. This also places the date of the boat firmly at the time when Newgrange and many of the other major monuments centred along the Boyne and wider Brú na Bóinne area were being constructed and in their primary phase of use. The Oldbridge logboat is one of only 11 logboats known to have been found in the Boyne but more importantly it is one of only 7 other examples known from Ireland to date to the Neolithic period (c.4000 -2500 BC).

Logboats are known to have been used for a wide variety of purposes in Ireland including fishing, travel, transport of goods, exploitation of natural resources, ritual activity and warfare and it’s likely that the Oldbridge logboat was involved in a number of these activities It has been previously put forward that much of the stone such as the greywacke, the granite cobbles/boulders and quartz used to construct Newgrange and the other Brú na Bóinne passage tombs was transported to the Boyne from the surrounding counties by boat, initially along the established coastal routes and then upstream to the Bend of the Boyne. While there is no direct evidence to link this boat to such activity, it is possible that this boat could have been involved in such activity either carrying stone itself, pulling stone laden rafts or as one of a set of paired logboats (the River Quoile logboat from Co. Down being a possible example of this and also dating to the Neolithic (see Gregory 1997, 16-17). At present, however, there is limited evidence for the use of logboats at sea off the coast of Ireland with the Gormanston boat (late Bronze Age), found in the Irish Sea 1km off Gormanston, being the only example known from an open sea context. There are many other examples from sea loughs, estuaries and inshore coastal waters which hint that their use in such environments was more widespread, even if oak logboats are not ideally suited to navigating at sea if conditions were anyway rough. It is therefore more likely that the Oldbridge logboat spent most of it time plying the waters of the River Boyne and its estuary during the middle Neolithic.

Details on the logboat have been added to the Wreck Viewer and can be found here. 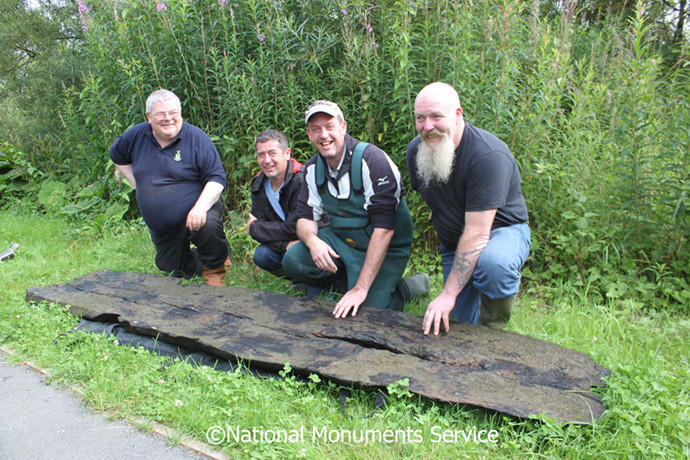 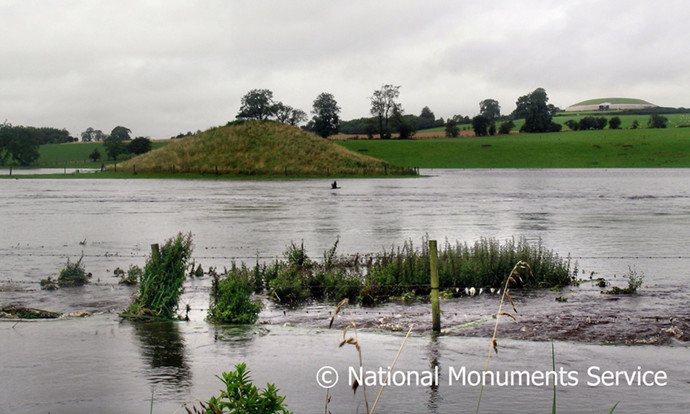 Riverside mound barrow/ passage tomb with Newgrange in the background